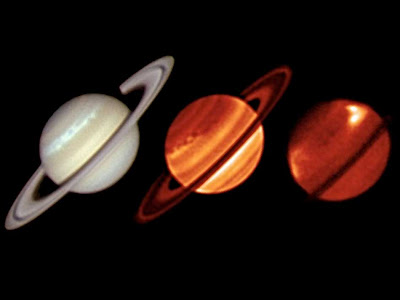 The rare storm has been wreaking havoc for months and shooting plumes of gas high into the planet's atmosphere.

The infrared image at top of page shows the entire south polar region with the hurricane-like vortex in the center.

As it rapidly expanded, its core developed into a giant, powerful thunderstorm. The storm produced a 3,000-mile-wide (5,000-kilometer-wide) dark vortex, possibly similar to Jupiter's Great Red Spot, within the turbulent atmosphere.

The dramatic effects of the deep plumes disturbed areas high up in Saturn's usually stable stratosphere, generating regions of warm air that shone like bright "beacons" in the infrared.

"Nothing on Earth comes close to this powerful storm," says Leigh Fletcher, the study's lead author and a Cassini team scientist at the University of Oxford in the United Kingdom. "A storm like this is rare. This is only the sixth one to be recorded since 1876, and the last was way back in 1990."